Are you ready for an emergency?

We URGE you to sign up to receive information on local incidents, evacuation alerts at Alameda County Emergency Alerts

PPNA is intent on building organized neighborhoods that are trained and equipped to respond effectively to emergencies.  Click on the link to learn more. 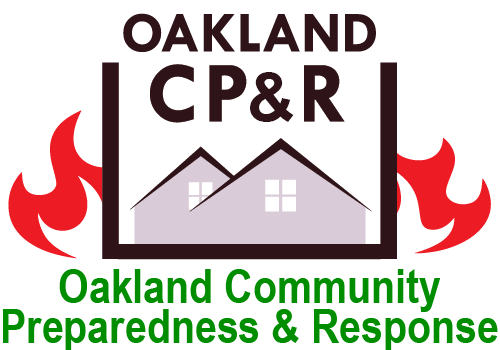 antime, a new organization has taken root:  Oakland Community Preparedness & Response (OCP&R) program is an offering of the Oakland Firesafe Council, an Oakland, California non-profit dedicated to mobilizing communities to reduce the risks of disasters to people and property through outreach, programs, and projects.

OCP&R is intended to educate residents on emergency preparedness steps including:

Another OCP&R service providing a new radio newtwork service, GENOAK (GMRS Emergency Network – Oakland).  In the event of a large-scale emergency such as a major wildfire or earthquake, individuals and neighborhood groups in and around Oakland may need to depend on information and assistance from other nearby neighborhoods. However, cellular, Internet and landline phone communications may be overloaded or disrupted. GENOAK fills that gap by creating neighborhood-to-neighborhood communications through two-way radios. Learn more about GENOAK and how to join the network.

CORE IS MAKING A COMEBACK!

The CORE (Communities of Oakland Respond to Emergencies) program educates volunteers about disaster preparedness for the hazards that may impact their area and trains them in basic disaster response skills, such as fire safety, light search and rescue, team organization, and disaster medical operations. The back-to-back earthquake and firestorm disasters spurned the creation of the Communities of Oakland Respond to Emergencies (CORE) Program in April 1990. Neighbors helping neighbors became the premise of the program.  The CORE program teaches self-reliance skills and helps neighborhoods establish response teams to take care of their neighborhood until professional first responders arrive.

If you have participated in, or expressed interest in completing one (or all) of the CORE/CERT (Community Emergency Response Team) preparedness training programs, or if you are interested in volunteering for the City of Oakland in response to emergencies in our community, or if you just want to be kept in the loop, complete this quick questionnaire or go to http://bit.ly/ReadyOakland